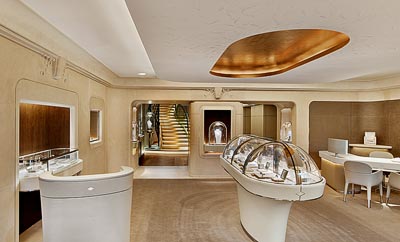 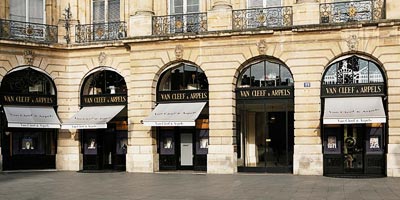 Façades of the 22-24 Place Vendôme in Paris

A few steps away from its historic boutique, Van Cleef & Arpels is inaugurating new salons in Place Vendôme: the center of Parisian High Jewelry and heart of the Maison since 1906. Located at number 20, this space has been reinvented by the Jouin Manku Agency to showcase Van Cleef & Arpels jewelry and watchmaking creations, but also its heritage  which will be permanently on display. 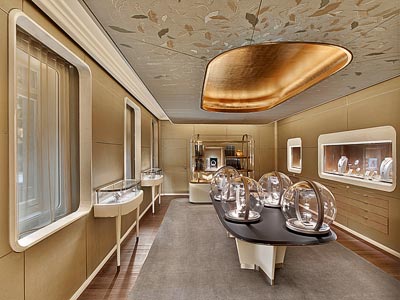 The story of Van Cleef & Arpels belongs in Paris Place Vendôme. Designed by Jules Hardouin-Mansart at the end of the reign of Louis XIV, its perfect octagon is traced out by the clean, restrained lines of the 18th century mansions that form its perimeter. In 1906, the Maison opened its first boutique at number 22; it soon spread into number 24 as well.

One hundred years later, the designer Patrick Jouin renovated it, blending emblematic elements of 18th century decor  such as carved oak paneling  into a contemporary showcase dedicated to Van Cleef & Arpels world of plants and wonder.

In 2016, the Maison is leaving the Rue de la Paix to refocus at three numbers in Place Vendôme: 22 and 24 have now been joined by number 20. In a spirit of consistency and unity, it has entrusted the design of this new 280 m2 space  spread over two levels  to the Jouin Manku Agency.

The interior architecture ushers visitors on a fluid, intimate stroll between surprise and wonder, through a succession of rooms that evoke the atmosphere of a private home. Each of them different, they are an invitation to discover Van Cleef & Arpels collections, in particular via themed salons dedicated to jewelry, heritage and iconic timepieces. 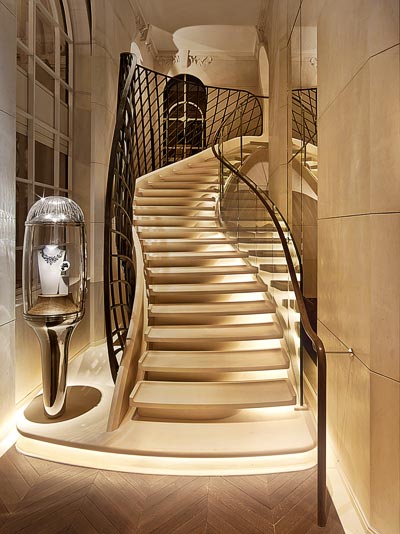 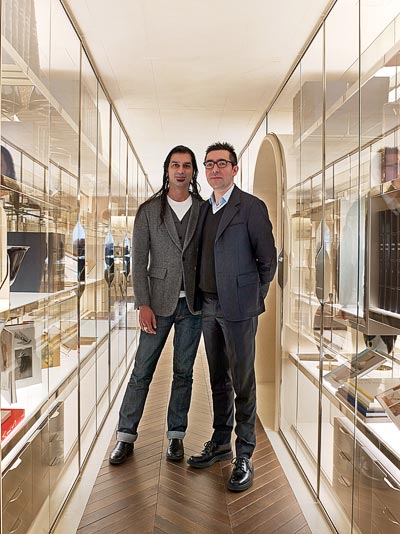 Sanjit Manku and Patrick Jouin in the library

A showcase for jewelry and watchmaking collections

Entering number 20 Place Vendôme, visitors find themselves in a welcoming setting that blends gradations of beiges, gray, white and watery green, accentuated by bands of polished nickel like rays of light. The hushed atmosphere is further emphasized by the curved lines of the furnishings and the materials chosen: light-colored stone, smoked oak floors, wool and silk carpeting and embroidered fabric on the walls and ceilings.

Against this tailor-made backdrop, muted tones make way for the brilliance of Van Cleef & Arpels creations. In the very first salon, jewelry collections inspired by nature  Cosmos, Fleurette, Socrate or Deux Papillons  are unveiled in display cases framed in stone and lined with smoked oak. The same attention to detail is apparent in the space devoted to the Maisons heritage. On the ceiling, embroidered foliage and a dome painted with gold leaf look down on vintage pieces from the Van Cleef & Arpels Collection, presented in temporary exhibitions.

The journey of discovery continues upstairs, in the form of glass-fronted bookcases containing drawings and works on the history of the Maison. An intimate atmosphere reigns in this space, which provides access to two salons. The first invites visitors to contemplate iconic Alhambra® and PerléeTM creations in the light from Place Vendôme, which filters in through arched windows. Typical of the architecture of the Place, the latter are adorned with elegant latticework in relief, with butterflies, birds and a starry vault looking down from above. Like walkers raising their eyes to the heavens, visitors catch sight of a scene inspired by the four seasons on the ceiling, providing a subtle reference to the rhythm of nature. Time resumes its onward march in the second salon, where the CadenasTM, Charms and Pierre ArpelsTM watches are brought together in a contemporary setting of gilt and embroidered fabric.

While wood is a dominant feature at number 22, here the Jouin Manku Agency has given a central place to Paris stone, the material of the squares façades and great monuments of Paris. It adorns the floor and staircase, along with the ceilings and display cases, like a constant presence inside the boutique.

At the entrance, visitors eyes are drawn to the monumental staircase that connects the two floors. Formed of blocks of Paris stone, its steps seem to hang in the air, thanks to a technical feat: each one is pierced and linked to the next by a cable which, when tightened, becomes the staircases backbone. A wrought iron banister  its form evoking a regal butterflys wing  literally surrounds it and guides the visitor.

To offset the mineral simplicity of the Paris stone, the interior design is embellished with sculpted motifs, an ornamentation of the ceilings and display cases that imbues the surroundings with a gentle, ethereal quality. Various skilled craftsmen  including stonemasons, plasterers, metalworkers and cabinetmakers  have given free rein to their talents to bring this sophisticated project to fruition. As in Van Cleef & Arpels High Jewelry workshops, ancestral skills combine with modern techniques to rise to new challenges and create original elements of architecture and furnishing.

At the foot of the staircase, a tall display case with an egg-shaped silhouette  crowned by a dome of carved crystal creating plays of light  draws the attention. Created specially for 20 Place Vendôme, it presents exceptional pieces while inviting the visitor to explore the upper floor. 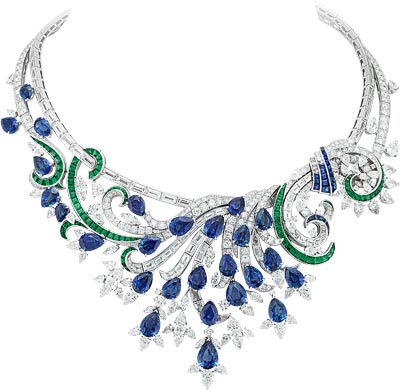 The opening of the boutique is an opportunity for Van Cleef & Arpels to offer an exclusive preview of the Cascade Mystérieuse necklace, a brand new creation from its Place Vendôme workshops. This exceptional piece has its origins in a rare batch of stones: 28 pear-shaped sapphires from Madagascar, weighing a total of 66.47 carats.

Their velvet blue hue accentuates the asymmetric movement of the necklace and punctuates a stream of brilliant, pear-shaped and marquise-cut diamonds to evoke a glittering cascade. In this precious arabesque, the deep green of the baguette-cut emeralds contributes a plant-like interlacing. 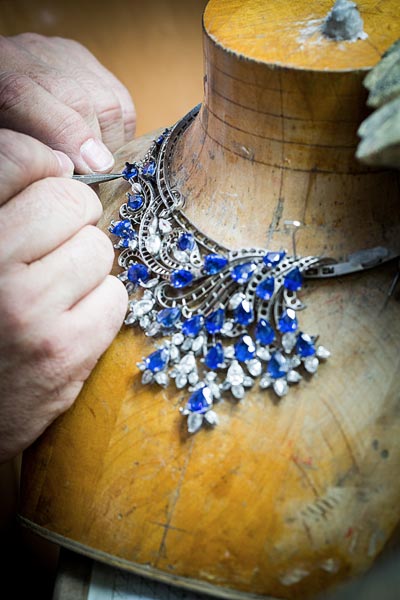 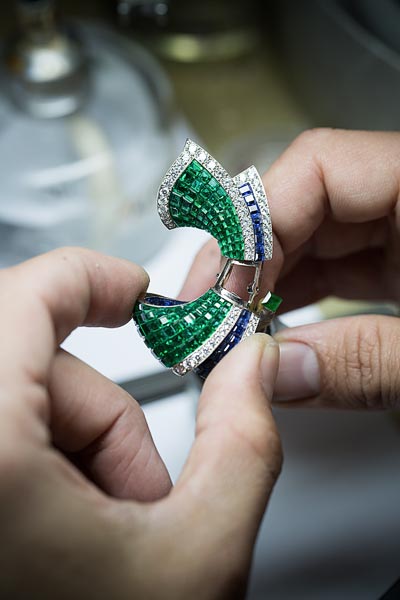 Lastly, in an illustration of the Maisons attachment to the art of metamorphosis, the necklace can be transformed with two detachable clips, either of which can enhance the piece. The first suggests the abundance of nature, while the second depicts a bow in three dimensions, adorned with sapphires and emeralds in Traditional Mystery SetTM  an operation made all the more intricate by the latter stones delicacy. By combining the poetry of nature with the elegance of a couture motif, this necklace demonstrates Van Cleef & Arpels attachment to these two worlds, while celebrating the Maisons High Jewelry savoir-faire. 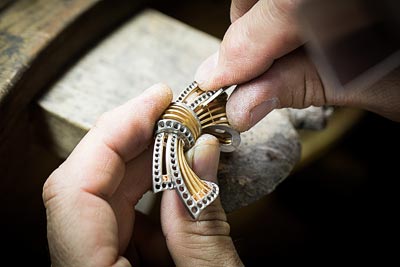 Founded at Paris 22 Place Vendôme in 1906, Van Cleef & Arpels came into being following Estelle Arpels marriage to Alfred Van Cleef in 1895. Over the decades, the excellence of the High Jewelry Maison established its reputation across the world. Its emblematic signatures  such as the Alhambra motif, the Zip necklace or the Mystery Set technique  its selection of Pierres de CaractèreTM, exceptional gems that instill an emotion, and the savoir-faire of its Mains dOrTM, the virtuoso craftsmen of Van Cleef & Arpels workshops, have given birth to jewelry and watchmaking collections redolent of dreams and enchantment. Today, the Maison remains faithful to this highly distinctive style characterized by poetry, refinement, creativity and artistic sensibility. Whether inspired by nature, couture, dance or the imagination, it offers the world a gateway to a timeless universe of beauty and harmony.

From the renovation of the Place Vendôme boutique through to those in Hong Kong and New York, a special relationship has grown up since 2006 between Van Cleef & Arpels and the Jouin Manku Agency. The duo has also created decors for four major exhibitions devoted to the Maison: The Spirit of Beauty, at Tokyos Mori Arts Center in 2009, Set in Style, at New Yorks Cooper-Hewitt National Design Museum in 2011, Timeless Beauty, at the MOCA Shanghai in 2012 and LArt de la Haute Joaillerie, at Paris Musée des Arts Décoratifs in 2012-2013.

Patrick Jouin and Sanjit Manku have taken part in exceptional projects with leading names, including Alain Ducasse and Pierre Hermé, deploying their creative dialectic in the fields of spatial planning and architectural design. From the
restaurants of the Tour Eiffel and the Plaza Athénée in Paris to a private residence in Kuala Lumpur and the renovation of the French capitals Gare Montparnasse, they instill in each project a fusion between the designers personal analyses and inspirations and a contemporary, universal language. Beyond the spaces they design and the elements that make them unique, they create moments of grace as discovery supersedes architecture itself, accentuating the experience of a suspended moment in time: the fleeting revelation of a new venue. 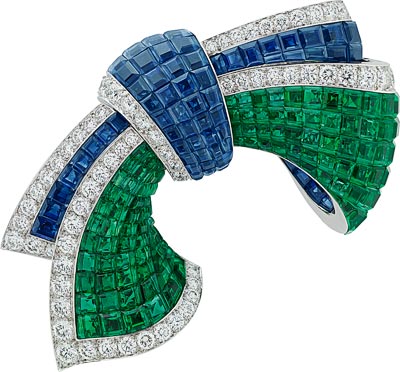